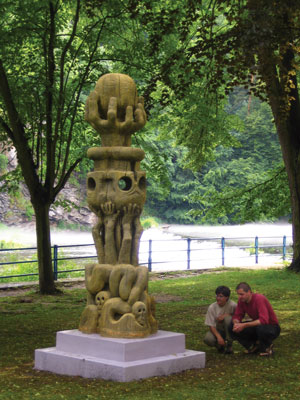 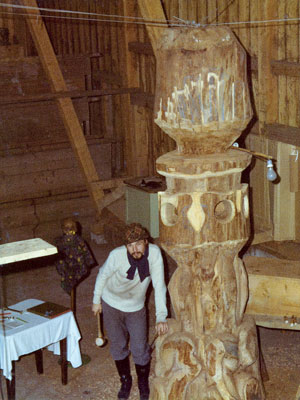 The sculpture Thaya – Destiny of a Tree (1968) was created as a memory of his distant homeland, which at that time was forbidden to him, when Lubo Kristek was living and working in Germany. It finally ended up in Vranov nad Dyjí with the Glyptotheque. In the photograph, on the left, there is the sculpture in Kristek’s first German studio (Kaufering 1968), on the right in Vranov nad Dyjí.

“In connection with the promoted cycling tourism and already existing routes for visitors to the region, another opportunity has been opened to travel along the river from the source to the mouth, with stations at works having the inimitable character of the original artist.” (1) 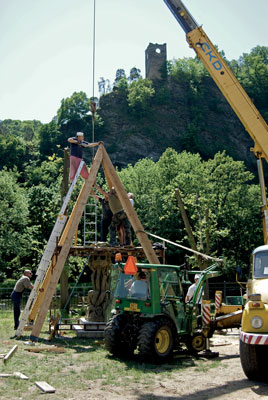 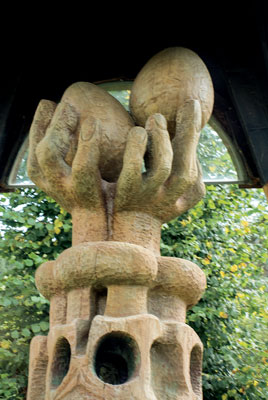 In 2010, a devastating storm hit the region, and in addition to the nearby tall trees it destroyed almost half of the wooden sculptures. With the help of the village of Vranov nad Dyjí, the sculpture was successfully restored. A pyramidal shelter was added which now protects it. In addition to other things, the natural disaster also destroyed the globe located on the peak of the original sculpture. Kristek is convinced that the increasingly frequent natural disasters are to a certain extent caused by man himself, and he decided to top off the reworked sculpture with two eggs (ab ovo), which now symbolise hope for the future. 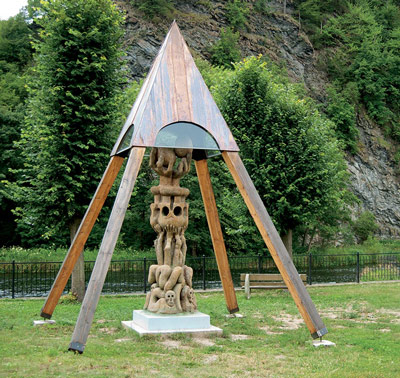 The hand represents a great number of meanings. In general terms, it is considered a symbol of government, authority, honour and gravitas, but also strength, activity, work, pledge and welcoming. Hands are also a symbol of the unification of people. Hands can take life, protect, come together in prayer, and serve as a tool for hard work. Extended hands may mean a plea, and a raised hand a threat. Kristek used the theme of extended hands in his sculpture Thaya – Destiny of a Tree, where the hands serve as supports. On the top of the sculpture, Kristek has used the symbolism of two eggs in the palm of a large hand. The hands, preserved in material, stand in eternal witness to their uniqueness and inimitability. The uniqueness of hands is also given by the fact that there do not exist two identical sets of fingerprints in the entire world. And so they can be a form of signature and expression of personal identity. As far back as the early Palaeolithic era, the handprint on cave walls represented a form of transcendental contact, the purpose of which was to summon up the forces seated in the womb of the earth. It was an expression of an individual aware of his mortality and attempting to leave a permanent trace and so reach out beyond his own death.