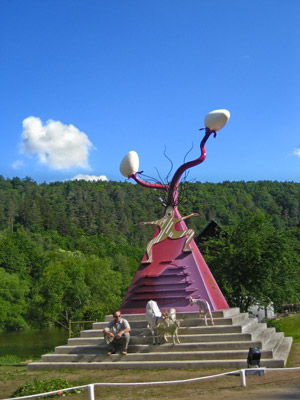 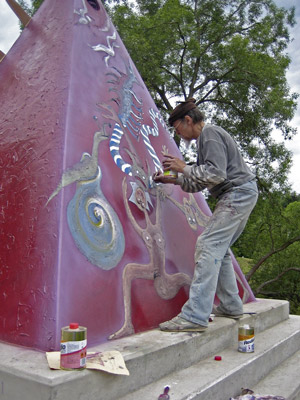 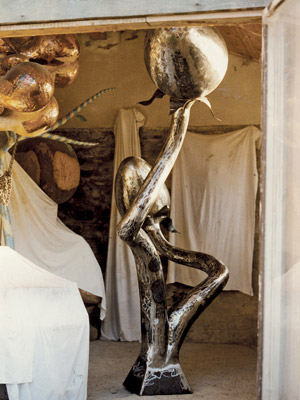 Lubo Kristek created the fourth sculpture of the Glyptotheque in the years 2005–2006 specifically for the station in Podhradí nad Dyjí. A precursor of its form can be seen in the picture The Consumption of the Priest (2005).
He attached his other symbols to it – two eggs, which the Munich magazine Applaus mentions: “Another important symbol of the circle of life in Kristek’s works is the egg. In its simple integrity, it contains everything and contains the germ of eternal repetition.” (1) 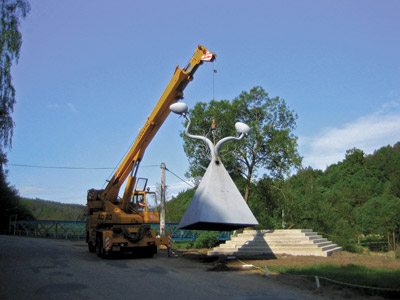 With regard to this sculpture, Kristek said the following for the newspaper MF DNES: “In the current materialistic era there is a great danger of a drift away from the equilibrium between the intellect and nature. So it is not enough just to 'manufacture' art as mere decoration. Art must – especially today – be capable of waking man up, engaging him, attracting him and, if necessary, also healing him. ‘Healing’ him of the disease which nearly every one of us has started to experience for some time now, because humanity is losing the ability to make healthy use of the energy which nature, the cosmos and the earth offers it.” (2) 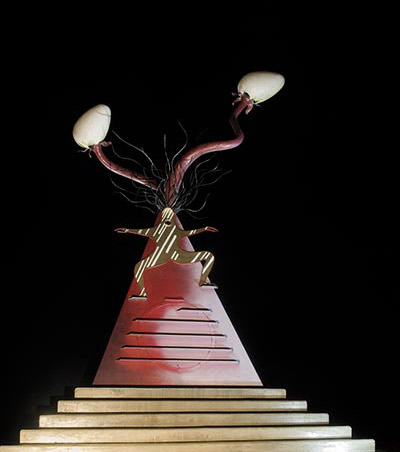 Pyramids represent accumulators and transformers of the energy that is concentrated in their centre. The energy comes from the depths of the earth and the neighbouring space and flows from the base to the apex. The pyramid is the primal hill, the mythical and holy place of birth, resurrection and eternal life linking the earth and the heavens. Burial chambers were to be found within the pyramid. Kristek’s sculpture The Cosmically Timed Parapyramidal Potency allows energy to be drawn. The pilgrim climbs on to its wall, presses himself against it and merges with its surface. Here he can draw sufficient natural energy, gain equilibrium for living and personal balance. The sculpture also balances the flow of energy in the immediate surroundings, and a secret meditation chamber is to be found at its centre.