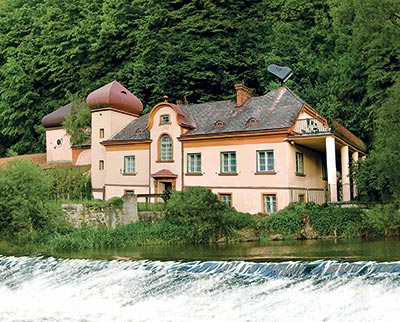 Chateau Lubo in Podhradí nad Dyjí is the heart of Kristek Thaya Glyptotheque. Lubo Kristek settled here after wandering around the world. On the apex of the roof, he located a metal sculpture – a piano balancing on one leg. The symbolism of this work is typical of Kristek’s creativity. Roses grow through the dancing piano.

He has experimented all his life with the idea of penetration, merging and mutual fertilisation of forms – he painted a piano with roses growing through it in the picture Suite for Biophilic Piano Attacked by Masochistic Tuba (1995), and flowers growing through objects also appeared, for example, in the pictures First Revelation of Unknown Energy (1974) and Sharp Penetration of Prostatoidal Scone by Hoary Willowherb (2012).

“In his expression, Kristek balances on a delicate point where various styles and expressional resources combine. One of his life-long symbols – the piano standing upright on one leg on the apex of his studio's roof in the Czech Republic – is also one such.” (1) 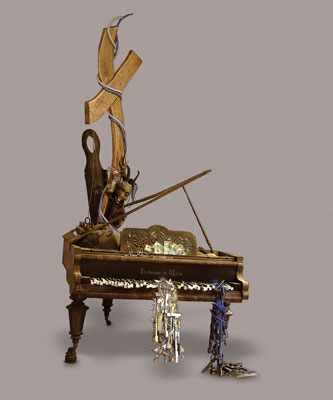 It was in this area that the concept of Kristek Thaya Glyptotheque matured, and here plans were drawn up for other projects or events, and from here the artist's other work flowed. He represented the combination of muses not only in the happenings, but also in the assemblage Apotheosis of the Human Brain (2010). Here we can find reference to theatre, literature, ballet and nails and the crown of thorns. The brain can create the deepest works of art as well as the most excruciatingly painful items.

In the assemblage The Stubborn Attempts of the Paraplegic Bloody Goblin (2010), the keys flow from the keyboard, just like the water on the weir in front of the windows of Kristek’s studio. The cross does not form a limiting framework, but its lines are in movement. The goblin reaches up on the cross, but he remains on the ground, and only the blue-white yarn – the natural elements of water and air – winds up to heaven. 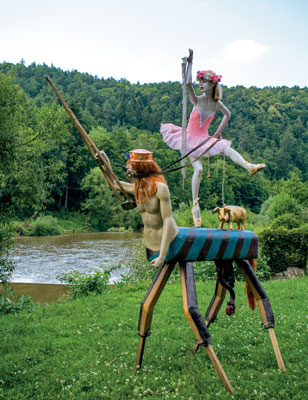 In many works, he returns to Greek inspiration, such as in the assemblage Secret of the Štrýbl Creek (2004), in which he also references the legacy left by the Swiss painter Arnold Böcklin (1827–1901). The ferry takes the souls of the dead over the river Acheron, and here the ferryman takes on the form of a bird.

The assemblage Attempts of the Modern Achillea or Chiron Can No Longer Do Anything (2013) is based on Greek mythology, which Kristek develops further in his fantasy. The centaur Chiron is made up of a gymnastic vaulting horse. Achilles is in female form; she holds Chiron by the reins and dances ballet figures on his back. She leads a golden pig, the symbol of plenty, behind her. 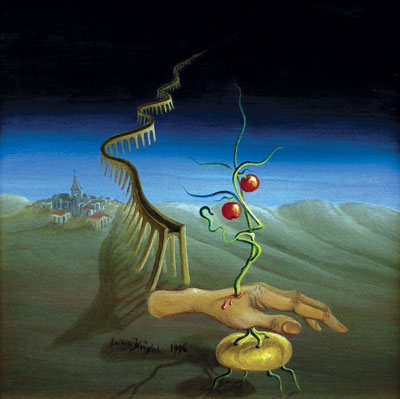 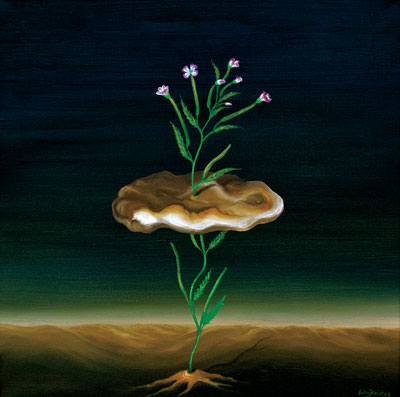 The 4th station of Kristek Thaya Glyptotheque also comes to life thanks to the intimate events that the artist organises for the unveiling of his new works. For example, in 2013 as part of a programme consisting of poetry reading, surreal violin music and a mini vernissage, his latest works, in which he combined wood and silver, were unveiled: Cosmos, Aureola and the Monstrance of Light(3) (2011) and Stabiliser of Insufficient Number of Hands (2012–2013). Hands are the dominant feature of both sculptures. The symbol of hands appears in many forms in Kristek’s work. In the works of the early period sometimes a hand of resistance appears, a hand that refuses or punishes. But soon he employed the hand which creates (for example in the sculpture Thaya – The Fate of the Tree at the 5th station) or protects – the picture The Protecting Hand (1996) – and in the current works this symbol offers an important message. The hand frees itself, it gains the form of a wing or even reveals the inner essence of phenomena, as in the sculpture Stabiliser of Insufficient Number of Hands, where from the centre of the flower of ingrowing hands a drop of blood squirted and brought to the surface that which had hitherto been concealed. 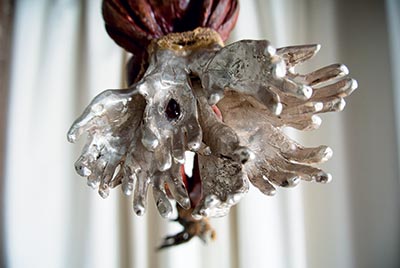 The sculpture is a homage to Kristek’s friend, the sculptor Augustin Čech.