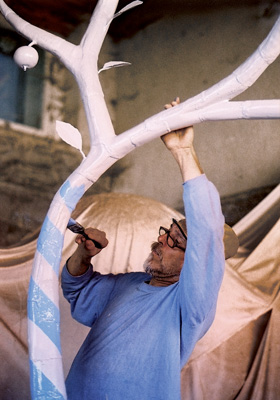 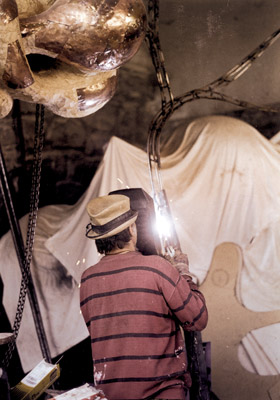 For the station at the source of the Moravian Thaya, Lubo Kristek chose his lifelong symbol – the apple tree with two apples. We can find this symbol, for example, on the painting Forest Impression (1995), where Kristek discovers the locality of Podhradí (later the 4th station of the Glyptotheque) and where it grows up through an old cart. He also painted a tree with blue-white form and red fruit in the picture The Cosmically Timed Study of the Witch Quarter of the Family Gebhard (1994–1995). In its roots sits a conductor from whom all time derives. In the background, one can see Landsberg backwaters. Both of these localities were at certain times a home to Kristek, and his fate and the centre from which he moved on. So he dedicated this symbol to the start of Kristek Thaya Glyptotheque and called the metal sculpture Birth (2005–2006).
The symbolic tree protects both the source of the Moravian Thaya and a copy of the statuette Spring Well (Jaroslav Krechler) and blesses the stream. At this place the first drops well up from the ground which later form a large river. 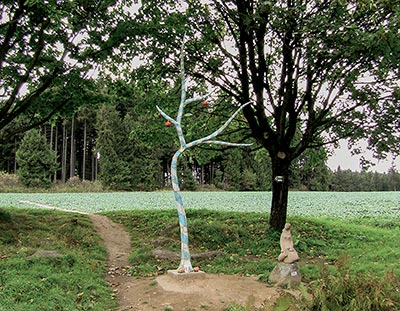 Kristek’s sculpture Birth represents a tree with bare branches – the Tree of Life, the symbol connecting heaven and earth. Its branches reach up to the heavens, and the roots penetrate deep into the earth. In the shapes of the tree, one can find similarities with the human body – the tree trunk is like the torso, the branches are reminiscent of spread-out human arms, and the roots are evocative of feet firmly planted on the ground. In mythology, there are trees that speak to people, especially those who “seek the truth”, whose mind is open to transcendental stimuli. The originally small seeds undergo metamorphosis and gradually grow into a strong tree. Nature is the exemplar of endurance and doggedness, strength and resilience. Kristek located the sculpture Birth at the source of the Moravian Thaya, a rising, pure form of life. Its blue-white symbolism conforms the purity, clarity and calm that pours into the inner aspect of man at this place of pilgrimage. The sculpture Birth models the space and naturally blends in with the environment, because pilgrims hang on the branches various artefact they have brought.