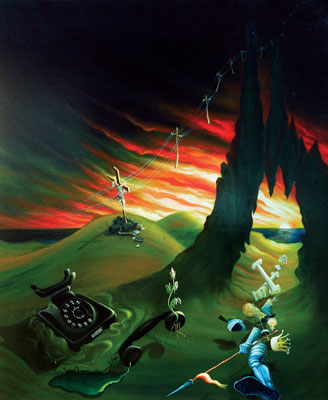 In this happening message, the artist deals with communication and the danger of developing a dependency on modern conveniences. But the symbol of the telephone had already appeared in Kristek's earlier creative period. For example, the dying telephone in the picture The Moss Covered Telephone Call (1978–1982) represents the dying communication in the current world. Communication is one of Lubo Kristek's key themes. Not only communication between people, but also communication as a journey that leads nowhere. The previously mentioned heavenly highway is replaced here by poles carrying telephone wires. On one of the communication route's poles, the Crucified on Golgotha is made up of modern society's rubbish. But another route runs parallel to this one, the route of our ancestors’ legacy, our inheritance. It consists of many attributes from preceding epochs, for example armour, a crown, a bust of Queen Nefertiti, an Ionic column. A camel stands at the start of the path of the ancestors' legacy.

The Scottish theologian, semitologist and anthropologist William Robertson Smith(1) (1846–1894) speaks of the camel in the context of totemism and ritual sacrifice. Totemism is “a system of impressions according to which the origin of a certain group of people from a common ancestor (the totem) is derived”. (2) According to Smith, the sacrifice of the camel is the oldest known form of Arab sacrifice and a totemic banquet during which those participating in the ceremony received the meat and blood of the sacrificial offering; it was a tool for maintaining social cohesion.(3) According to Smith’s theory(4), the camel symbolises the godhead, and the point of this sacrifice was to renew the firm bonds between the participants. In Kristek’s Moss Covered Telephone Call, the camel, which we can interpret as the symbol of the godhead, stands at the start of the path of our ancestors' legacy. The parallel path of modern society consisting of wires culminates in the Crucified. By dealing with the motif of sacrifice, the artist emphasises the need to renew social relations.

In the series of happenings Requiem for Mobile Telephones, which came into being in Znojmo (the 7th station of Kristek Thaya Glyptotheque), Kristek continues with these ideas after a quarter of a century and develops them further. In the meantime, society has changed, and mobile telephones free of wires have become a common part of life. The relationship of contemporary society to the mobile telephone bears the traits of a cult or even a pathological dependency. And so in the happenings, Kristek’s places this “modern god” on the altar (a block bearing the inscription Rest in Peace). The figure of a surreal giant triple-breasted angel drilled holes in the mobiles which the participants of the happening bring to this event (they actively participate in the sacrificing of mobiles). 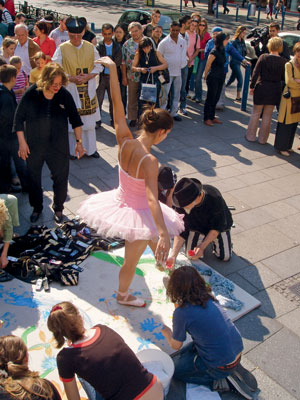 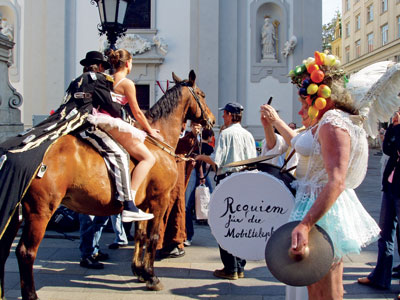 The first in the series of happenings was held in 2007. The spectators brought their mobiles to the event in the Znojmo daily paper Rovnost(5) and after holes had been drilled in them, they sewed them on to Kristek’s robe with a train. In the next part he continued down the pavement on Mariahilfer Straße, Vienna’s main street. A horse bears the artist, dressed in a robe with mobiles sewn on to it. Kristek takes off his robe, kneels before the canvas on the pavement and along with the happening figures (the signing priest, the ballerina creating a work of art with her pointe shoes coated in paint, the figure in the straightjacket, the musicians in contemporary police uniforms, the midget tuba player, etc.), secondary school pupils(6) and spectators he creates an assemblage with the same name as the happening series Requiem for Mobile Telephones. One of the layers is once again action painting, and this time all the spectators are invited to create. The interactive assemblage then went on display at the Ruegers Palace in Riegersburg (2007). 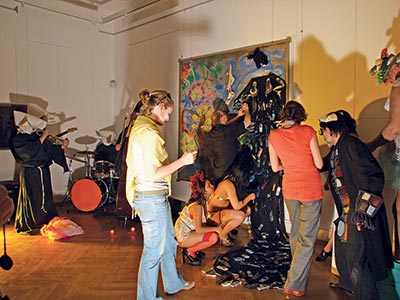 The happening message continued in 2008 in the New Town Museum in the German town of Landsberg and was a part of the retrospective exhibition of Lubo Kristek’s works called The Third Eye of Remote Communication.(7) In the happening a new character appeared, Temptation (played by the prima ballerina of the Brno National Theatre Jana Přibylová), who gives the spectators electronic devices from a pink sack and who suddenly turnes into the devil). In one of the last scenes, this character toys with a representation of human fate – a black figurine – which she throws to the ground as soon as she tires of her plaything. At the end of the happening, Kristek carried the pink sack full of electronic refuse to the altar of the Landsberg Church of the Holy Cross. In this way, he emphasised the sharp contrast between our ancestors´ legacy and what will remain after the current epoch.

In the next of the happenings in 2010 in the Polish town of Sucha Beskidzka, he had the figure of Temptation being born of a stilt walker symbolising the Cosmos, who in the end swallowed up Temptation again. Here Temptation is almost naïve and innocent, and in her arms she cradles a doll wearing a gas mask.

Through the series of happenings Requiem for Mobile Telephones, Kristek points to the danger of fanatical worship of modern technology and dependency on it, but also the way that modern man is drowning in information and losing his bearings in it. It is as if he was referencing the statement of the American writer and dramatist Gertrude Stein (1874–1946) in the article called Reflection on the Atomic Bomb: “Everybody gets so much information all day long that they lose their common sense.” (8)

The artist destroys the mobiles in the happenings. He disposes of them like refuse, but at the same time, he applies the ritual principle of sacrifice. The participants of the happening then “receive” the destroyed telephone (analogous with the torn up god) or even “consume” it via their reconnection in the creative process (analogous with the resurrection). The characters and spectators sew the mobiles on to the travelling assemblage, and they become co-creators of a work of art with a shape that changes from event to event. So through his message Requiem for Mobile Telephones, Kristek achieves what he foretold in his picture The Moss Covered Telephone Call. He experiments with the involvement of the public in events at the interface between ritual and theatrical and creative art, with the use of random impulses during a collective creative process and with emphasis on the experiencing of the current moment. He attempts to restore lost communication and transform relations in an alienated “digital society”.

In his study of religion, William R. Smith proceeded from an evolutionary comparison. He compared various religions and sought parallels between them. It was a highly pioneering approach for its time, and Smith was accused of heresy several times in the course of his scientific work.

Smith, William Robertson (1889): Lectures on the Religion of the Semites. Edinburgh: A. and C. Black.

Smith’s concept of totemism provided basis also for theories of the Austrian neurologist and founder of psychoanalysis Sigmund Freud (1856–1939).

The happening occurred in the editorial offices of the Znojmo daily paper Rovnost.

A large part of the initial collection consists of mobiles which students of the Pražská Secondary School in Znojmo had collected.

Secondary schools from Znojmo (Pražská Secondary School), Vienna in Austria and Luboń in Poland participated in the happening.

The exhibition was held under the aegis of the Minister of Culture of the Czech Republic, Václav Jehlička, and the Bavarian Minister for Science, Research and Art, Thomas Goppel.