In Vranov nad Dyjí, Lubo Kristek returned to the strange people and sent them on their way. The happening started with a scene from the settlement of an ancient society. In the distance, over the river, the flames of a burning torch flickered in the night, accompanied by the murmur of the weir. There was dancing near the fire to the rhythm of the drums, and a little way off someone started another fire. One of the people took a burning torch and set off into the dark to explore, and on a small island discovered a human-sized cocoon. The peaceful night was filled with screeches intended to summon others – the unexpected find shook the society out of its usual life, everyone gathered around the unknown object, they lifted the cocoon above their heads and set forth with it on a trip along the river.

When the society was approaching the boundary between the world of darkness and light, they found their place and placed the find on the ground. The cocoon conceals a foetus, possibly an important message. It is a link in further development. This foetus became the new centre of events. People started to dance around it, and the dance grew into a wild convulsion bordering on a trance. It was as if the cocoon had turned into a radiating fire. 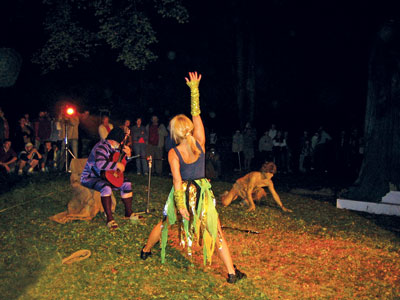 All of a sudden, the dance slowed and intensified into a ritual consisting of mutual smearing with earth. In this way, the people connected with Mother Earth, the primal source from which everything is born, in order to awaken the unknown life in the cocoon. The ceremony also evoked a sense of solidarity and deep devotion or even physical representation of joint mediation; a collective purging of the ego and opening up to natural forces. In the strange dance, they all smeared each other with their hands, they touched and jointly took on the form of the Earth – they blended in with it. The entire happening was infused with the motif of the hand, which is also a significant part of the wooden sculpture Thaya – Destiny of a Tree at this station. Hands create, they give rise to shape, they set the tone, they carry, they stroke and join together.

A second cocoon unexpectedly dropped down from the crown of one of the trees, and a male  figure stepped out of it. The man sat down and plucked at the strings of a musical instrument, and in that vibrating atmosphere the first cocoon opened up. A female hand rose from inside it. Everyone became part of the birth. The embodiment of the Thaya rose slowly from the cocoon. Her hands in long golden gloves bring the light. 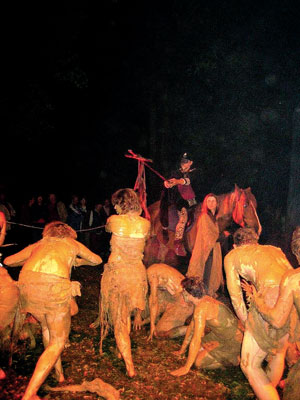 The embodiment of the Thaya started to whirl to the rhythm of the tones; the harmony of the strings resonated with the consonance of souls. As the dance culminated, Kristek appeared on a mare. As the pair merged in an embrace, he pointed at them with a cross, the holy connection of the divine verticality and worldly horizontality. The strange people started to wrap the pair in rope yarn to confirm their fusion. The yarn around them also formed a protective network; shielding them from the outside world. In the meantime, Kristek approaches the sculpture on the mare, and the black sheet falls away at his touch to reveal an abstract flower made of hands bearing a ball at their apex. The people surround the wooden sculpture. The earth on their skin combines with the wood of the sculpture. They become a part of it and link up to the flow of history with their hands. A living statue is formed from the bodies, soil and wooden sculpture. Man in combination with nature ascends in a spiral.

Video: happening at the 5th station of the Glyptotheque