In the Vortex of History and Happenings

Kristek Thaya Glyptotheque culminates at the 10th station at the Slovak village of Sekule, where the pilgrim arrives at the end. At this place, the rivers Thaya and Morava meet. It is also a triple state, where the corners of the Czech Republic, Austria and Slovakia meet, a place characteristic for its meeting of various worlds and their borders. In the happening, worlds also appeared that we could interpret as being different parts of a personality. At the very beginning, figures came out of the dark from the world of people and creatures from the realm of fantasy. We can see the selfish and profligate world of people, which falls apart and gradually loses its identity, as the rational part of the personality, whereas the realm of fantasy creates the instinctive component.

But on the stage, there were three large cocoons anticipating new impulses or change. Kristek hatched from the first and started conducting an invisible tree orchestra. The musicians sitting in the trees reacted to his hand movements, and they gradually joined in with improvisations until in the end the entire forest came alive in a symphony. This joint musical creativity symbolically gave energy to the second cocoon. It gave birth to a woman in white, a bride or representation of the female principle.

At first, she sought out a partner in her surroundings, but then she crossed the boundary between the worlds and saw a fantasy character. It was the fountain man who in the third happening in Drosendorf had started the society's pilgrimage for change (in the form of the spider march). At the moment, when the world of people met the world of fantasy via the bride and the fountain man, stiltwalkers as “cosmic commissars" drop silver fragments from a height. The lovers merged, the male and female principle conjoined, just like the two worlds, two components of personality, which had hitherto been separate. 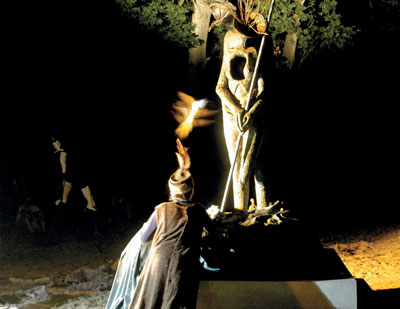 Mankind found itself in a net of its own delights. All of a sudden, the third cocoon started to come to life. It gave birth to the old woman Thaya, who was nearing the end of her journey. It was the same Thaya as in the vision from the third happening. Thaya danced to the pedestal of the last veiled statue, where she fell. Figures with a lantern appeared carrying a bier. They put the immobile old woman Thaya on it and carried her away.

Each of the three figures born from a cocoon brought their message. Kristek a message about creativity, the bride a message about the crossing of boundaries and merging of the worlds, and Thaya about the closing of the cycle. The tree orchestra started to play again, and Kristek took the human society, caught in the net, into darkness. Only the male and female element remained, conjoined in embrace. All of a sudden, the flaming funeral bier arrives by water and reaches the confluence, where the burning Thaya dissolves into the Morava. But fire is also a symbol of transformation. Thaya's life does not end, but continues in a different form. 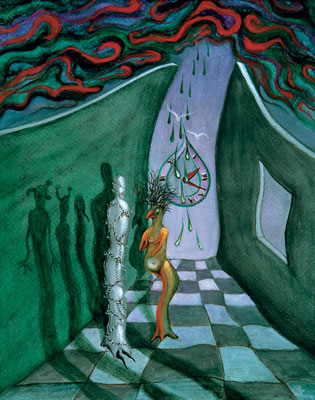 The concluding bronze statue, The Seekers, is unveiled, and two white birds are released from under the sheet. Kristek approaches the confluence, vowel sounds are heard on the Czech, Austrian and Slovak sides, and the border ceases to exist. At the same time, a long shadow is cast on the opposite bank, a shadow as a complementary part of the personality, as our second self, which may be an instinctive quality, but also a guide through unfamiliar lands, a shadow that Kristek painted in Encounter Amongst Strange Shadows(2012) and which takes us to the edge of the world, a shadow that allows us to look beyond this edge and so creates a bridge. The end of Kristek Thaya Glyptotheque and the end of the entire cycle of initiating happenings is not the end, but the start. Lubo Kristek and his statue The Seekers send the pilgrim on a journey of eternal discovery.

Video: happening at the 10th station of the Glyptotheque)