In the Vortex of History and Happenings

On the day before the Znojmo happening there was a destructive flood. The storm-tossed Thaya broke its banks and devastated its surroundings along the entire course of the river. Lubo Kristek's home was also flooded, along with a significant part of the costumes and technical equipment and nearly everything that had been prepared for the event. But this event, paradoxically, constituted an enhancement. Everything that had been prepared was useless, and the happening was reborn from what was available. It arose from the situation that had occurred.

The burst dam could have meant a disaster, but also symbolically a liberation – a flow of water can destroy but can also wash out the old deposits and can cleanse. At such moments, man cannot avoid deep considerations. It was as if everything that had just happened resonated with the name of another of Kristek’s statues, Deliverance from Suffering, which is to be found at the Znojmo station. The happening was initiated by a musician playing on a large cabinet with strings drawn across it. When all the furniture had been taken out of many houses because of the water, one such item became a musical instrument. The musician played on its strings, and behind the backs of the public the water flowed (the station is just a few metres from the river), which also created a sound backdrop. 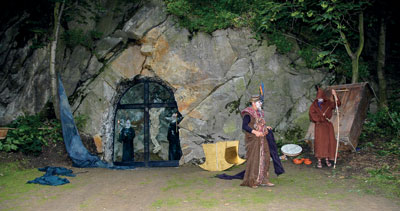 Kristek appeared in purple smoke and came to the cradle, in which two small apples were ripening. His tree always has two apples, and also two eggs, which for him symbolise the repeated beginning. Kristek pulled off the black sheet in front of the rock niche and revealed a chapel. He opened the iron gate and a nun came out of the chapel with a strange pitter-patter gait, a nun resuming the theme from the pictures of the previous happening. The action on the stage was accompanied by the musician playing alternately on the cabinet, ceramic work and a bow. A smaller nun was liberated from the nun’s insides, and Kristek brought her white headgear belonging to the order. But from the insides of the second nun a third one, the smallest, was freed, and she was the mother superior, the embodiment of the Thaya. Kristek removed her habit, and once again the golden gloves shone. He returned the unbitten apples to her and sent her back to life. 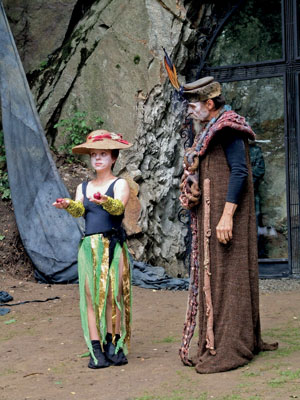 Two nuns with burning torches took up guard positions in the rock chapel, and Kristek unveiled his ceramic statue in which all artistic styles were combined in order to create Christ freed, and not only freed from the cross. The happening became a flow symbolising multiple liberations and the birth of one form from another. At the end, the wild water took back the accompanying musical instrument – the cabinet made from the wood of a tree whose seed sprouts after the rain. At this time, the creator of the happening was undergoing a personal transformation due to the flood – from the attempt to save his material belongings or the moment when he shut the door of a house through which a river was running and left to implement this happening, up to the sacrificing of his favourite cabinet to the waves of the flood.

Video: happening at the 7th station of the Glyptotheque