At the 4th station of Kristek Thaya Glyptotheque, there was a happening consisting of an animated landscape of dreamlike scenes. After a trombonist's jazz prelude, which the spectators heard below the ruin of the castle Frejštejn, the procession set forth for the veiled pyramid below Chateau Lubo. The journey was started by two tall stilt-walkers with incense. Other figures in the role of linkboys illuminated the way with flaming torches. The destination of the common pilgrimage was a seven-metre high metal monument.

This time, Kristek abstracted the Thaya onto the water's surface. Dancers moved in huge billowing sacks of glittering blue with openings, they ruffled the surface, and their appearing hands formed a strange picture. After the dancers were born of the foam on the surface, a writhing dance developed to the sounds of Dvořák's opera Rusalka, which transformed into a liberating feminine vibration of erotic ecstasy. At the same time there was a whirling dance by other characters. A creature with a large hunchback and a fairy wearing a bra made of colanders placed the endless scarf from the previous happening on the ground, a figure in a straightjacket swayed to the rhythm, a strange man in a lady's hat smoothed the path, two men dressed in nuns' habits guarded the sculpture, and a painter wearing a mask and naked below his open coat painted a picture. The audience suspects that the painter is Kristek himself. 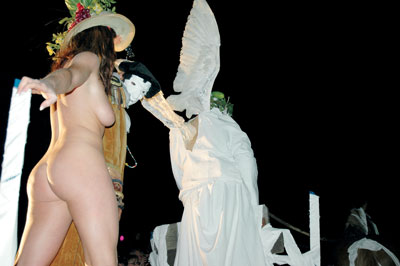 A carriage with a bandaged winged coachman appears from the dark, pulled by a bandaged horse. With this external depiction of injury, the happening’s creator asks to what extent contemporary society with bruised symbols is injured and how deep this injury goes. The carriage brought beautiful, naked Eva, the painter joined her and left on the carriage. The curious characters revealed a vegetable banquet, they fell upon it, and their insatiable gluttony turned the common banquet into a dramatic struggle. Melons, cabbages and tomatoes fly on the stage and at the audience, no one is safe from the pieces of vegetable. Everything gives the impression of a chaotic and self-destructive flow of scenes welling up from an open wound. It is a bizarre blend of the themes that drive society: beauty and ugliness, tradition, nudity, gender identity, restrictions, stereotypes and expectations. Society mercilessly rips up all the fruit of the earth in an insane, monotonous rhythm, and society itself falls.

At the moment when the last signs of life are going out, the centre of the hitherto veiled pyramid opens, and a dog appears in a round hole. Behind it there is a cat and hen, doves fly out, more and more animals emerge from the hole, until in the end Kristek appears with a goat and coloured kids. And now, it is finally seen that the painter who in the previous picture had departed with the naked girl to who knows where was merely an intentionally camouflaged illusion of Kristek. Within the metal structure, which is dominated by two eggs – the artist's frequent "ab ovo" symbol, life had been preserved from destruction as if in a new-age Noah's Ark. The animals have run away, and Kristek climbs up iron steps to the unveiled sculpture called Cosmically Timed Parapyramidal Potency in order to blend in with it. At this moment the whole sky about the Podhradí creek is flooded with sunlight.

What is inside often remains hidden. In the modern noisy times, it cannot be heard, and it cannot be seen through the layers of darkness. In spite of this, man has access to these deep resources if he seeks them, and the most ordinary messages can bring the brightest light.

Video: happening at the 4th station of the Glyptotheque