The 2nd happening was initiated by a male character with a lantern. This guardian of the light searched every nook and cranny, and then turned into a fox. The fox is generally the symbol of cunning, but it is also a traditional figure, for example in Japanese mythology, and magical abilities are attributed to it, including the ability to change form. In the context of the involvement of the fox skeleton in Kristek’s preceding projects, one could also interpret it as a figure that opens up the space for improvisation, creativity and experiments.

From the neighbouring woods, the fox lured two tribes of drummers wearing cloaks, who followed him to the 2nd station. At first one drum was heard, then more and more joined in. There was a rain shower during the happening, and for a time the sounds of the falling rain blended with the rumbling beat of the strange people. The entire forest and clearing became the “stage”, with the spectators in the centre. The drummers started to emerge from the forest, and the two tribes met face to face. The rhythmic chaos gradually gave birth to a common order, Death arrived on the scene slowly, picked up clock hands and started to measure out time. Death does not hurry, for he himself is time. 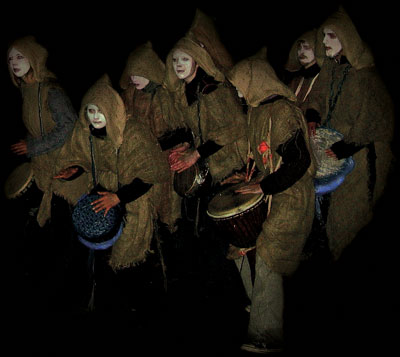 At this moment, the choppy waters of the river brought a basket bearing the Foundling – the embodiment of the Thaya. In the meantime, the newborn baby had grown into a girl. She arrived to the bank in a moses basket, found her mother and father there and set out on a journey in the pursuit of knowledge with them. They came to the Wishing Stones – a sculpture made of seven boulders of many tons. In the space between the stones, a massive red and black holy worm appeared (the creator of the Glyptotheque himself was concealed beneath the costume). In this way, he symbolically combined the water element (the personified Thaya) with the element of earth (the worm, which had emerged from the depths).

The mythical worm brings creativity and jointly with the girl paints the rocks. Kristek utilised action painting, which as far back as the 1940s shifted the means of perceiving creative art and put the creative process in the spotlight, instead of the finished work. The artist acts in his own “arena” and offers the spectator an event, an experience.(1) But Kristek develops this principle even further. He is not alone in his “arena”; he shares not only the experience of creating, but creating itself. It was neither the first nor the last time that he opened up his creative space and invited someone else into it. In the 1998 happening Love in circulo vitioso in finito secundi milenii, children born of black swans participated directly in the creation of a picture in the happening. Over the following years, Kristek developed the principle of involving the spectator in the process of creating the work of art, for example in the projects Requiem for Mobile Telephones and Testimony about the Soul. In the happening at the Wishing Stones, action painting is just one of many layers of significance accenting the actual process of creation and the common experience.

The giant worm completes the painting with Thaya, the clock hands of Death move closer to twelve, the strange people drum with a joint, celebratory rhythm, and a glow appears above the stones. And at the same time, the first scrolls drop from the skies. The work is completed. In the happening, the Wishing Stones gain their definitive form. The happening turned the meadow near the river into a pilgrimage site with a dominant sculptural feature into which the arriving people insert their wishes, written on scrolls.

Video: happening at the 2nd station of the Glyptotheque